I don’t beta read often. Actually, while I’m writing I don’t even get to read often, but it just so happened that all the stars were aligned last November.  I was in between books when an author who I knew casually asked me if I was available to beta read and that’s how I came to discover The Syrian Virgin by Zack Love

I hadn’t had a chance to read his other books yet, but they were on my list because they looked both original and interesting and that’s the kind of book I like.  In this case, looks were not deceiving, as I quickly discovered. After reading this novel, I went on to read everything he had written in rapid succession. I was positively delighted by the diversity of his work and the range of his writing ability. Frankly, I couldn’t believe that an author this talented wasn’t better known.  That’s when I decided to tell everyone who would listen and a few people who wouldn’t. (They tell me that the restraining order is only good for 90 days).

So, now the sequel to that book Anissa’s Redemption, is about to be released (March 23rd) and the book itself is on sale for $0.99, which in my opinion is about $10 less than it’s worth. Thus, I am taking it upon myself to once again tell people that this is a book worth reading, and I have included supporting evidence! (I am a lawyer you know).

A Review of The Syrian Virgin by Zack Love (5 Stars)

Well-written, poignant, timely and relevant, this book held my interest from the beginning until the end.

As the plot unfolds, the reader follows a young Syrian woman on a journey, both literal and figurative, as she leaves the familiar behind and faces the world, essentially alone. I felt invested in the story early on, experiencing feelings of tension and frustration along with the female protagonist, and sympathizing with her as she tried to cope with, and overcome the trauma in her past.

There are two male protagonists, and both men are powerful, but flawed, in different ways. That fact doesn’t detract, however, from how interesting they are. In fact, at one point, I caught myself feeling guilty for having misjudged one of them.

The book was clearly well-researched, and accurately portrayed the political climate, and the history of the region. The plot was engaging, and I looked forward to seeing how it unfolded, developing my own theories along the way. Which is not to say it was at all predictable. In fact, it was quite original, and the end left me eager to read more about these characters.

All in all, the level of the writing was well above average, and I honestly enjoyed it more than any novel I had read in quite a while. Highly recommended. 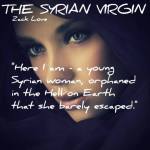 Anissa Toma fled war-torn Syria after narrowly escaping the massacre of her Christian family by Islamists. Fortunate enough to rebuild her shattered life in New York City, the young refugee gained admission to an elite college, where she excelled. Her beauty, brains, and purity soon captured the interest of two powerful men: Michael, an activist working to establish Antioch, the first Mideast Christian state, and Julien, her professor and one of the city’s wealthiest bachelors.

As Anissa’s saga continues, the refugee-turned-rising-star must navigate between Michael and Julien, while trying to help her surviving relatives and other vulnerable Christians in Syria. As she gets closer to both men in a complex and evolving love triangle, can she unlock Julien’s traumatic childhood to open up his heart? Or will Julien find greater solace from his nightmares and other demons in the sessions with his intriguing therapist? What will Michael do for Antioch and for Anissa, and what will Julien’s role be? How far will each person go to help Anissa’s remaining family and other persecuted Christians at risk in Syria? Find out in this stunning sequel to “The Syrian Virgin.”